To achieve maximum efficiency, most of the oil in soybeans is extracted by leaching during the crushing process. So the soybean oil that can be seen on the market is mostly refined oil produced by leaching method. Do you understand why do large scale soybean oil processing plants tend to choose the pretreatment puffing leaching process to produce soybean oil? 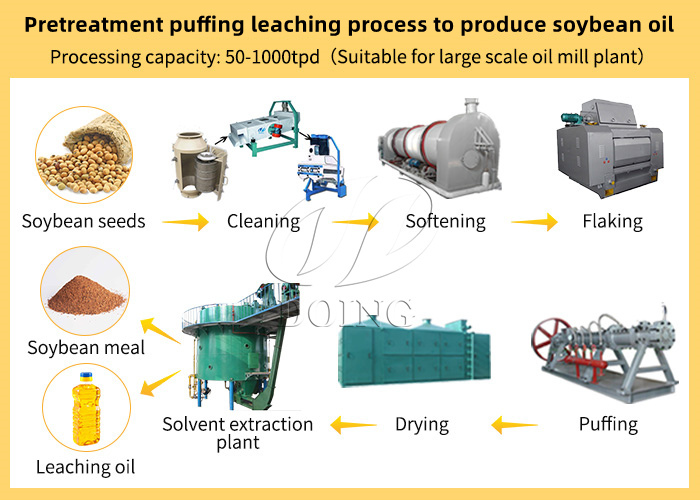 First, the price of soybean oil extracted by leaching is relatively low. In cooking oil, we often eat mainly soybean oil. When we cook food materials in life, no matter what kind of cooking method, we will use cooking oil. As a result, each family needs a large amount of cooking oil, and we will choose the one with high cost performance. Many people believe that the dark color of cooking oil is good. Actually is not such, basically be to want to see the production technology of edible oil. Although the oil extracted by leaching method is cheaper, it has many disadvantages compared with other processes.

Secondly, the method of leaching oil rate is very high, soybean oil rate in 20%. There will be a small part of the oil residual in the oil cake in the process of pressing, about 7%, large-scale production line will cause oil waste. The method of extracting oil by extruding after leaching is to expand the soybean first, increase the leaching area, and then carry on the leaching section. The leaching process uses a chemical solvent to mix, evaporate, strip, and finally recover the solvent for recycling. It has a strong adsorption capacity, can absorb the oil, and then high temperature distillation, so that the soybean oil can be extracted out of 99.99%, and finally refine, the oil degummy, deacidification and a series of processing. Only after these subsequent processing can be sold in the market, otherwise the harmful substance components will not reach the national standard.

PREV：What is the cost of groundnut oil extraction machine?

If you wanna to get more details about Why do large scale soybean oil processing plants tend to choose the pretreatment puffing leaching process to produce soybean oil?, you can send E-mail to sales@doingoilmachine.com. Or you can consult our professional engineers and specialized sales team by leaving a message in below form. We will contact you ASAP. You also can visit our factory in Henan, China.